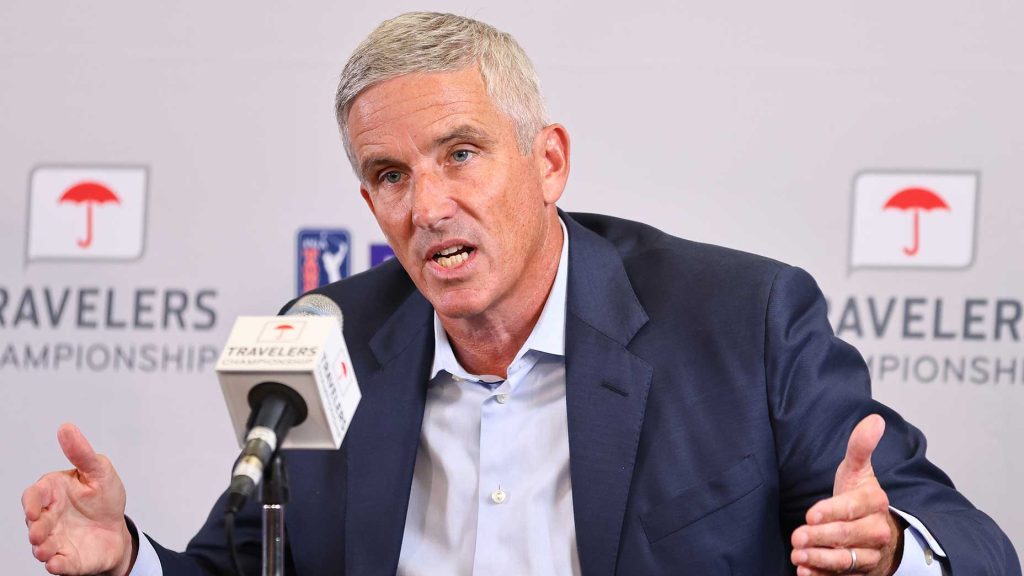 For weeks now PGA Tour Commissioner Jay Monahan has been touting the tour’s history, legacy, and competitive integrity as its main advantages over the Saudi-backed LIV series. After all, as Monahan himself acknowledged in his recent press conference, if it comes down purely to money, the Tour cannot compete. It would be like Tiger Woods in his prime going up against the local club champion. There’s only going to be one winner.

The presence of competition resonates with some of the best golfers in the world, such as Rory McIlroy, Jon Rahm and Justin Thomas, major champions all and three of the top five players in the world. Each of them has spoken up in defence of the tour and for the need to test themselves against the best the game has to offer.

In contrast, the LIV series has a funky format, no cuts and features only 48 invited players playing 54 holes. Whichever way you slice it, that’s a lower level of competition compared to how professional golf has been played for the last few decades. Would we value the majors the same way if they were limited to 48 players, had no cut, and lasted only 54 holes? Of course we wouldn’t.

Similarly Wood’s legendary streak of 113 cuts made is rightly celebrated because it is an incredibly hard thing to do. That’s a challenge the LIV series as currently structured cannot provide.

And yet the changes to the schedule that Monahan has proposed in response to the threat of the LIV tour will result in a reduced level of competition on tour, thereby undercutting his own argument.

In addition to significantly increased prize money at eight events, three more events will have no cuts, including the Arnold Palmer Invitational and the Memorial. In addition to this, the tour will add three events after the FedEx cup ends in the fall that will be open only to the top 50 in the FedEx rankings that year. The events will have larger purses of US$20 million and be played in Europe, Asia, and the Middle East. That sounds suspiciously like the LIV tour, albeit with regular tee times and four rounds. In other words, these tournaments will effectively be an exhibition series for the top 50 players with nothing but money at stake.

That’s a potentially dangerous game for the PGA Tour to play because unlike the LIV series, the tour needs TV money. It’s not a given that fans will tune in to see these fall events, especially since golf will be competing for eyeballs with college football and the NFL, both of which are wildly more popular in the United States.

On top of that, the FedEx Cup will not feature only the top 70 in the rankings as opposed to the top 125. The tour has also done away with the fall wrap around schedule – not necessarily a bad thing – but replaced it with events for players ranked outside the top 50 in the FedEx rankings, who will then compete to secure their playing privileges for next year.

While that’s good news for the top players, in effect that means the rich will get richer while the players in the middle of the pack and younger players will have fewer opportunities to break into the top tier.

““How are Korn Ferry players supposed to get access?” one current tour player who is currently in the 51-to-125 category asked in a conversation with Golf Digest. “They could have increased the purses and just kept the schedule the way it was. The tour is more than just 15 guys.””

Monahan is clearly hoping that the new schedule and increased prize money will prevent further defections by the Tour’s top stars.

“What we’re doing here is a response to the current environment we’re in,” he said. “To say everybody supports this would be an exaggeration, but it’s the right move for the organisation.”

Whether it is the right move is questionable. Most golf fans can tell you how many majors Woods and Nicklaus have won, but 99 per cent of them won’t be able to tell you how much prize money players have earned over the course of their careers. That’s just not the yardstick we use to measure the best golfers in the world.

In attempting to tackle one problem, Monahan may have created another one by diluting what makes the tour, and professional golf, special in the first place – that players have to earn everything they get. In the process he risks doing more damage to the tour than losing a few stars to a potential rival would have done.

In any case, currently the game of professional golf is in flux with more uncertainty than anytime in the past 50 years. The disruption caused by the Liv Tour and the divisive forces on the Tours  will either permanently fracture the game or make it stronger than ever  – watch this space for more updates and analysis.