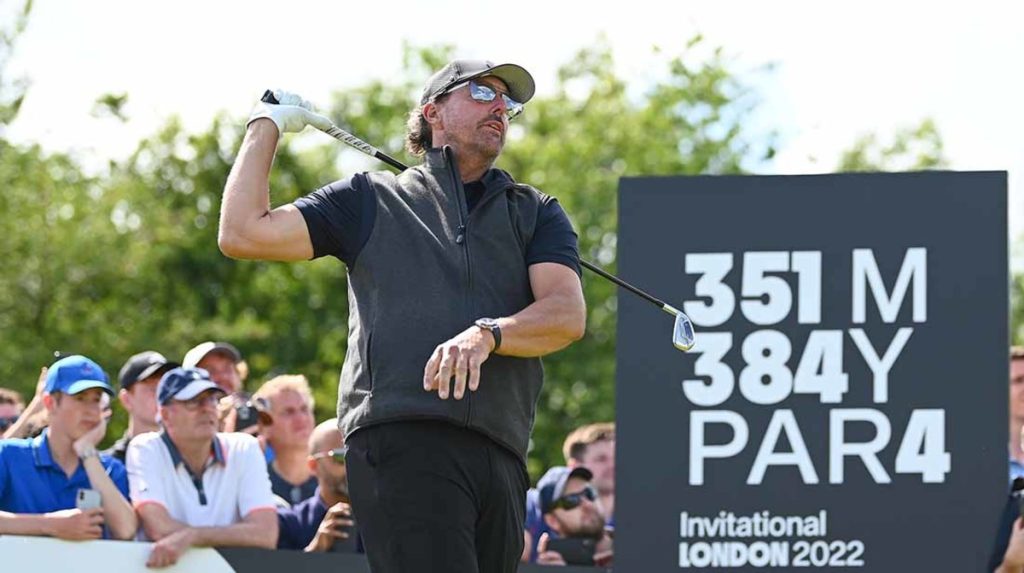 In Saturday’s final round of the first of the much-hyped LIV series events that teed off in London, South Africa’s Charl Schwartzel, the eventual winner, was in the final group with his fellow countryman Hennie du Plessis and American Peter Uihlein. The trio are currently ranked 126th, 133rd and 327th in the world, and have two PGA Tour wins between them, albeit one of them is The Masters.

Meanwhile in Sunday’s final round of the RBC Canadian Open on the PGA Tour, the final group was made up of Rory McIlroy, Justin Thomas, and Tony Finau. This trio is currently ranked eighth, sixth and 18th in the world, and has won 38 PGA Tour titles and six Majors between them.

Setting aside for the moment the allegations of sportswashing and the naked greed on display, therein lies the problem for the LIV series. While the prize money is far in excess of what the PGA Tour can offer, the quality of the golf remains decidedly less so. One Golf Digest writer described it as a field “that with a few notable exceptions, is composed of has-beens and never-wases”. In fact, with no world ranking points on offer, the event in London was essentially a lavishly paid exhibition. While such an event might attract fans who want to see what all the fuss is, it is unlikely to hold the interest of golf fans in the long term. As it is ESPN reported that ticket sales were so poor, the organisers decided to give most of them away.

And with 19 of the top 20 players in the world rankings (Dustin Johnson is the only exception), and all four current Major champions, choosing to stay on the PGA Tour, at least for now, the PGA tour clearly still offers a superior quality product to golf fans.

The LIV series has also handicapped itself by limiting the field to 48 to accommodate the shotgun start format, and by eliminating the cut. This is good for the golfers – they all get to make more money – but for the fans it not only means less competition, but also having to watch players such as Andy Ogletree and Turk Pettit, who finished at +24 and +15 respectively. If you are wondering who those two are, you are not alone.

The shotgun format is also going to take some getting used to as it resulted in some odd sequences during the broadcast. For example, during Saturday’s round, viewers saw tournament leader Schwartzel make a birdie on the 13th followed by Ian Poulter, who was 15 shots behind Schwartzel, hit a shot on the 12th hole. Then with two holes to go, viewers were treated to a shot of Mickelson, 18 strokes behind the leader, putting for bogey on the first hole. That’s disorienting and takes away from the tension and drama of the event. The irony is that more fans probably wanted to watch Mickelson than they did Du Plessis or Uihlein in the final group.

The bells and whistles that the LIV series has been touting don’t actually revolutionise the game either. Adding a team element is potentially interesting but was confusing to follow. At one point in the final round, the commentators mentioned that a birdie made by a player from the leading team resulted in their lead doubling from five to 10 shots. One of the commentators went on to express surprise at this but no explanation was forthcoming for the fans who were watching, leaving them in the dark. It was also hard to keep track of who was on which team, and why fans should care about any of them. There’s no context for the teams, no geographical grounding to create loyalty. The players don’t even play with each other so if there was any team camaraderie, it wasn’t visible.

In fact, strip away these tweaks and the series is still golf in its usual format – stroke play. At 54 holes instead of 72, it also offers 25% less golf for the fan to watch, and only one weekend day of golf compared to two on the other tours.

“It’s still just golf isn’t it,” Connor McGuigan, one of the younger cohort of fans in attendance on Friday, told The Guardian. McGuigan had received a free ticket and compared the experience to The Hundred in cricket. “The teams don’t matter,” he said, “and the golf has the feel of a kick-about. Loads of people are here to have fun and aren’t really watching the golf. It feels a bit like the Hundred if I’m honest and there’s no chance I would have paid for a ticket.”

McGuigan is just one fan, but a similar assessment was offered by ESPN, which described the event as feeling “less like a golf tournament away from the rope line and more like a festival. A lively crowd, including hundreds of young kids, partied in the Fan Experience Zone … The golf, in fact, felt secondary to the party unfolding.”

ESPN also reported that outside of Mickelson’s opening tee shot on Day 1, no other shot received anything close to a roar. Meanwhile on the other side of the Atlantic, McIlroy took a quiet shot at the LIV series, by saying “It’s certainly the best atmosphere of any golf tournament going on this week.”

Of course, Greg Norman and the Saudis know all this. That’s why they are throwing huge sums of money at players to get them to switch allegiances. They have money to burn and unlike a purely commercial venture, don’t need to turn a profit for years, if ever. But they need the top players in the world – or a significant proportion of them – to make this work because that’s whom the fans want to watch. The likes of Pat Perez and Harold Varner III are not going to move the needle.

The PGA Tour knows this too, which is why it has moved to ban the players who took part in the LIV series from playing on the tour.

In all likelihood, the money will induce a few more of the top players to switch allegiances in the coming weeks. But if the Majors decide to ban the players who take part, or if the OWGR does not allocate points to the LIV series, it will be reduced to the level of an exhibition tour with nothing but huge sums of money to recommend it. In such a situation, it’s hard to see why the majority of golf fans would want to watch it, and therefore why it would exist at all.