The tournament, which includes a unique pro-am experience in the final two rounds of the pro tournament is inspired by similar pro-am format events by the PGA Tour at Pebble-Beach, California and by the European Tour at St. Andrews. 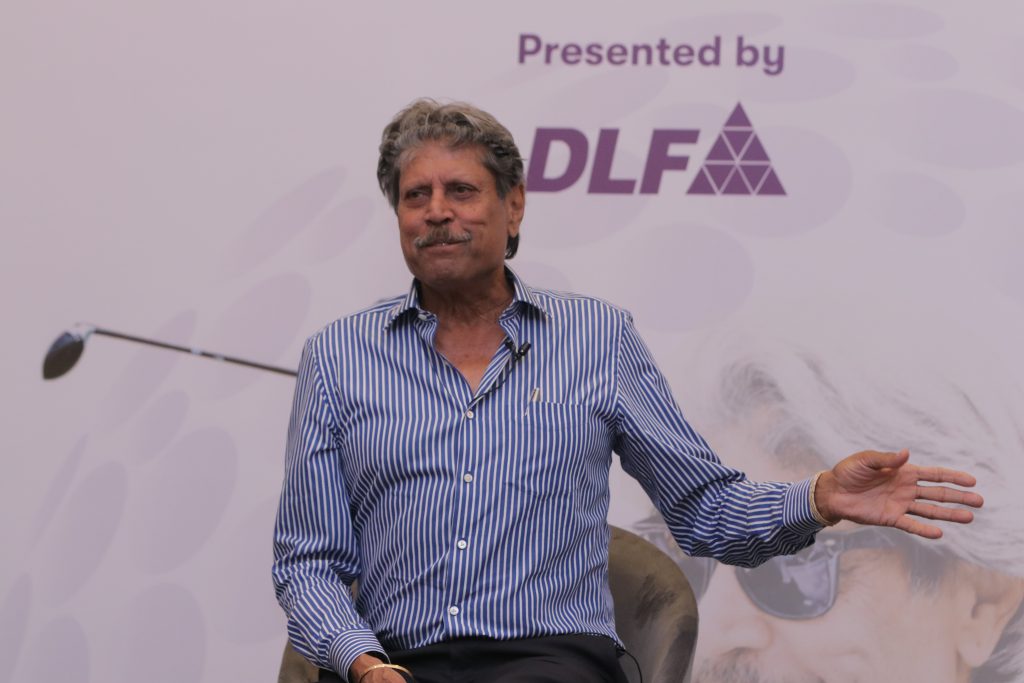 The tournament will  see 126 professional golfers start and after two days, the top 50 players and ties will advance to the final rounds.

In the final two rounds, each pro will team up with an invited amateur player who belongs to one of the 12 teams competing for Team Pro-Am prizes where the pros can win additional prize money.

The gala event will culminate with a high profile celebrity laden pro-am event on Saturday morning.

Besides the regular PGTI talent, Gaganjeet Bhullar, who has an Indian record 10 victories on the Asian Tour and Jyoti Randhawa, a former Asian Tour No 1 will add star power to the event.

Among those expected to appear at the event are ex-cricketers Ajay Jadeja, Ajit Agarkar, Madan Lal, Nikhil Chopra and others.

The 1983 World Cup winning captain, Kapil Dev, said “I am really excited about the tournament and would like to first thank Vishesh Chandiok, CEO of Grant Thornton for sharing my vision of creating a truly landmark event in Indian golfing history. Also all my friends and supporters for supporting the event and particularly DLF for agreeing to host the event at the amazing DLF Golf & Country Club. The event is being created keeping in mind other global standout events like the annual Pebble Beach Pro-Am on the US PGA Tour and the European  Tour’s Dunhill Championship at St. Andrews, the Home of Golf. Now we have something equivalent in India and what better venue than DLF’s legendary Gary Player course.” 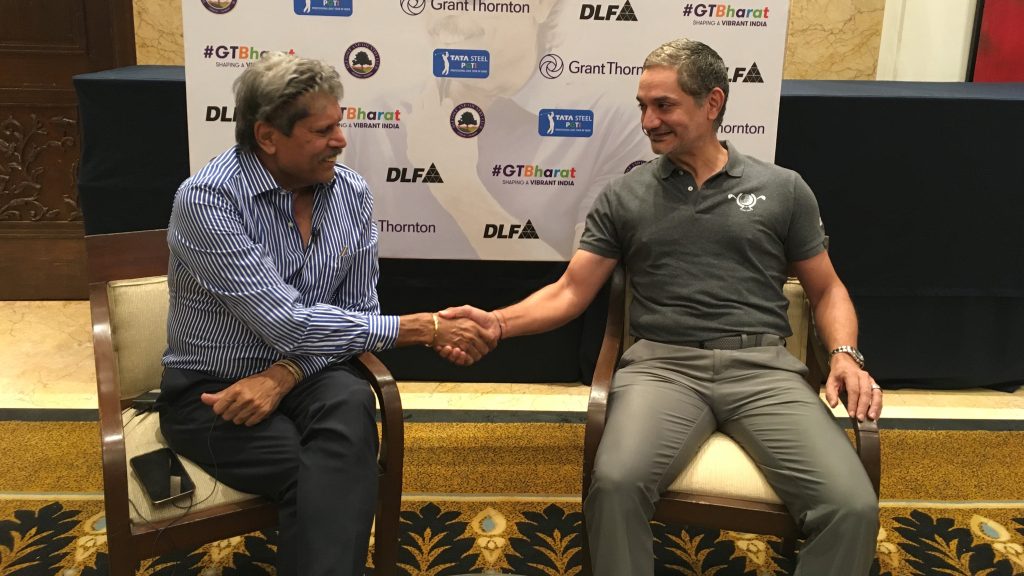 Added Vishesh Chandiok “Grant Thornton is deeply involved with global golf. We are a long term partner to the (US) PGA Tour and particularly their flagship event “The Players’ “ Championship in Florida which is considered the equivalent of the 5 th major where nearly all the world’s top 100 players participate. Our global golf ambassadors include standout PGA Tour players 2021 British Open winner Collin Morikawa, Rickie Fowler winner of 4 PGA Tour and 2 European Tour titles, long hitting PGA Tour winner Cameron Champ and the Korda sisters – Nelly the Tokyo Olympic Gold medallist and Jessica, who won last week on the LPGA Tour, as well as Women’s PGA Championship major winner Danielle Kang and LPGA winner Mel Reid of England. Grant Thornton’s global vision statement is “Growing Golf Together” where we want to make golf accessible to people from all walks of life. We hope this outstanding tournament to which we , Grant Thornton Bharat, have committed long term inspires more youngsters to take to this wonderful game which teaches so many invaluable principles of life.” 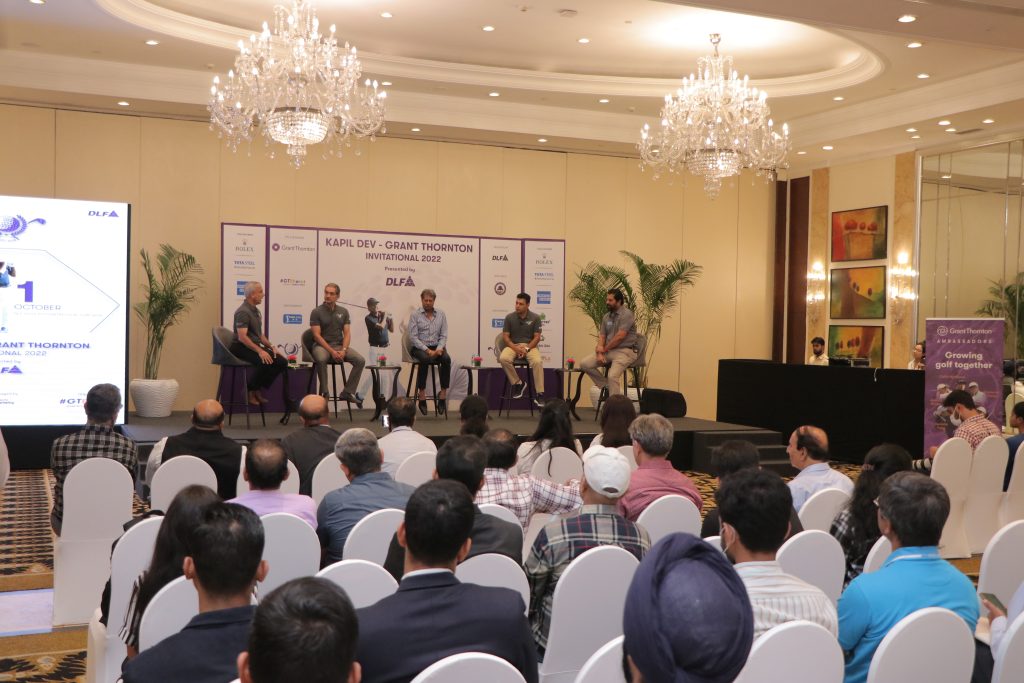 Tusch Daroga, General Manager of DLF GC said “ The DLF GC has hosted the Hero Indian Open – both Men’s and Women’s for the past many years on the European Tours which has given our Indian players an opportunity to test their games against the best players in the world from across the globe. Adding the Kapil Dev – Grant Thornton Invitational to our club’s calendar of events is indeed fitting. We look forward to welcoming legends from all walks of life to our wonderful facility which does a lot already to nurture champions and provide practice facilities to several of India’s top players – our course provides the level of playing conditions and challenges that help them prepare to play tournaments anywhere in the world.”

PGTI CEO Uttam Mundy, also present at the press conference added, “We at the PGTI are excited about adding the Kapil Dev – Grant Thornton Invitational to our schedule. We thank our Board Member Mr. Kapil Dev for being the driving force behind the launch of this event. We also thank Grant Thornton Bharat and all the other event partners for contributing to the growth of Indian professional golf. The tournamenr’s unique format is an added attraction as top amateur golfers will partner with the professionals in round three and four to compete for separate team prizes. This rare opportunity for amateurs to rub shoulders with the professionals in a professional event adds tea, spirit and camaraderie to the mix, making for a thrilling contest at the world-class DLF Golf & Country Club.”

“This format has been tried and proven for several years on the PGA and European Tours to be a success. “It promotes engagement between fans and the players – because golf allows this pro-am format and we intend to use this to strengthen interest in professional golf in India,” Vishesh Chandiok added.